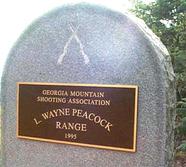 In the beginning, it was just a group of guys who would meet up at a local gun store, swap stories and talk about how good it would be to start a range.

Later on, they were getting more organized and started meeting at The Bank of Toccoa, (one of the bank managers was an early GMSA member).  They soon figured out, with the help of Mr. John Addis (GMSA President at the time), that they could get a recreational use grant on local US Forestry land.  John contacted Mr. Tom Hawks, a US Forest Service Ranger out of the Clarkesville Office and Mr. Hawks helped John get all the paperwork started.  With this, the other member/officers signed the paperwork, wrote a check for a whopping $100 and sent it all of to Washington, DC.

GMSA was off to it's first start!

That first range was set up on Prather Bridge Road and the club developed and built it along with the help of the City of Toccoa's Police Department.

We were at this site until the early 1990's when a timber company executed a like-for-like land exchange with the US Government for the land.  Early relations with our new land lord were fairly good and as they clear cut the timber off the land, this gave us much needed space to develop a rifle range.

Shortly after the land was clear cut, the new land owners soon sold the land to a local developer and the future of our member built range became very unsure.  Relations between GMSA and the new land lord continued to decline during this time and somewhere around Christmas 1991, our lease was not renewed and we were asked to vacate the range after New Years.

Club members quickly got together and after an exhaustive search, found and purchased the land at our current location.  Our current range is just over 26 acres and is owned by a partnership who is governed by the club.  Due to the skillful creation and outlay of the land purchase and partnership agreement, GMSA should never again be forced to leave it's facilities.​​

We would love to build this page up with the rich history of GMSA.

If any current or past members could help us out with past events, photographs, etc, we would be grateful.

Your writing doesn't have to be perfect, just write down your thoughts and we'll do the formatting for the website.